World of Vegan founder Michelle Cehn is a bright light in the vegan and animal rights community. She has been working to make change for farmed animals, people and our planet through her upbeat videos, photography, and creative activism. The World of Vegan website is an incredible resource full of the latest in vegan news, creative recipes, videos, guides, meal plans and inspiring stories from the Plant-Powered People Podcast. Michelle is no stranger to the Central Coast, both parents live in Cambria and are a part of the Central Coast Vegans community. We interviewed Michelle to understand all the excitement behind her work. 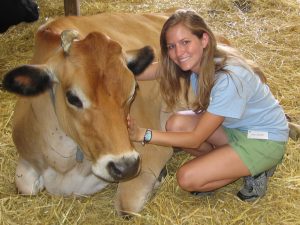 How/when did you become a vegan?

I picked up a copy of Peter Singer’s book Animal Liberation at a used bookstore while I was in college. As I read it, my eyes were opened to the cruelties inherent in the dairy and egg industries. I had already been vegetarian for many years (since age 8), but at that point, I realized in order to live in alignment with my values, it was time to go vegan!

What inspired you to create World of Vegan?

Being vegan is easy. But going vegan can be challenging, especially when you don’t have a support network around you and you have no idea what you’re doing. I started World of Vegan to make that journey easier for people, and to serve as a “virtual friend” so nobody has to feel like they’re going at it alone.

Since the time you started World of Vegan have you seen a rise in people going vegan?

Gosh, yes. This is an exciting time to be vegan! Every week there are new vegan foods coming to life, new vegan cookbooks surfacing, and of course, more and more people going vegan. When I first became vegan (a decade ago) people couldn’t even pronounce the word. There was only one vegan cheese. You were lucky to find soymilk at a cafe. And finding another vegan in real life was like winning the lottery. Today, everyone knows someone who is vegan. It’s accessible, it’s even cool!

Can you share a few of your favorite cooking tips to make vegan cooking easy? In short: do more of it, and it will get easier! But aside from that, invest in a good sharp chef’s knife and a quality cutting board. That will make all your onion, garlic, and veggie chopping so much easier. Become intimately familiar with a few staple recipes so that you no longer have to follow the recipes. I swear by my instant pot pressure cooker to speed up the cooking time for rice, beans, soups, stews, artichokes, and beyond. And finally, cook big batches so you’ve got leftover meals and don’t need to embark on a new cooking adventure three times a day. You’ll have fewer dishes to clean that way, too!

How do farm animal sanctuaries play a role in being vegan? As vegans, we open our eyes and expose our hearts to the deepest, darkest cruelties of the world. Once we witness what happens to animals in factory farms, on transport trucks, and in slaughterhouses, we carry the heaviness of that suffering with us eternally. It can weigh on our spirits and feel soul-crushing to know (and for the most sensitive among us, to empathetically feel) what is happening in the shadows in the world around us.

Sanctuaries not only provide freedom and peace to rescued animals, but they also provide a space for compassionate humans to release that tension and hurt we carry with us from what we’ve witnessed. Sanctuaries provide a space for us to see the beauty, kindness, care, healing, and forgiveness present in the world. And it’s in those spaces and in those moments, looking into the eyes of animals who are at peace, that we can begin to heal.

What do you love about being vegan?
It’s such a simple, powerful, delicious way to help our world three times a day (…or more if you snack a lot like I do!).

Find Michelle Cehn and lots of good stuff at worldofvegan.com