Written by Patrick Kerans in Animals, Politics/Law
SHARE
By Peggy Koteen
We ask you to find/make the time to URGE Governor Newsom to BAN LIVE ANIMAL FOOD MARKETS in CALIFORNIA by signing this change.org petition.

California annually imports some 2 million non-native American bullfrogs for human consumption (commercially-raised). Plus an additional 300,000 to 400,000 non-native freshwater turtles, all taken from the wild in states east of the Rockies.
Most of the frogs are imported by Bay Area wholesalers for distribution throughout California. These live animal food markets are common in Oakland, San Francisco, San Jose, Sacramento, and Los Angeles, among other cities. Frogs and turtles are routinely stacked four-and-five deep, without food or water; many butchered while fully conscious.
https://www.change.org/p/gavin-newsom-governor-newsom-ban-live-animal-food-markets-in-california?recruiter=27255507&utm_source=share_petition&utm_medium=facebook&utm_campaign=psf_combo_share_initial&utm_term=psf_combo_share_initial&recruited_by_id=81bdf470-d289-012f-40a8-4040b91ba155&utm_content=fht-21424502-en-us%3Av17 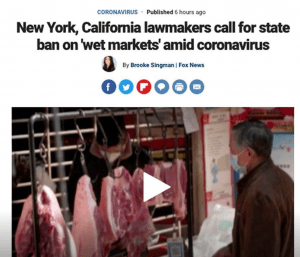