The implications for our planet, health, and the animals are massive.

The study forecasts the overall demand for protein food growing significantly between 2025 and 2040. However, animal agriculture begins a steady decline resulting in a reduction in its present $1 trillion market demand to 720 billion in 2040.

You might think this decline in animal ag production isn’t enough and you’re right. We think this tipping point actually represents a fundamental shift. 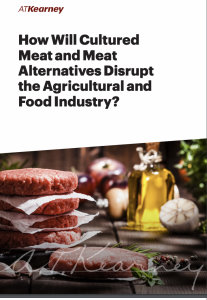 5 Reasons Why This Report Spells “Doom” for Animal Agriculture

1. A.T. Kearney is a VERY conservative firm that derives significant income from the animal ag sector. When they use the word “disrupt” in the study title, they really mean to say: “watch out, a train is coming.”

2. The #1 driver of change in market share between alternative and animal ag producers is cost. Impossible Foods just announced cost parity with animal meat products. This represents a tipping point for the animal ag industry.

3. As the decline progresses, its impact on the animal ag industry will be continuous and relentless. Investors seeking returns will move to growth sectors. Risks associated with animal ag liabilities from pollution, vaccine resistance, human rights violations will weigh more heavily on the industry.

4. Alternative products will only get less expensive, more healthy, and better tasting than animal ag products. This will become a global phenomenon.

5. China has not yet entered the market in full force. China has its eye on every disruptive emerging industry there is from elective vehicles to artificial intelligence, sustainable energy and you name it. The U.S. is the current technology leader in alternative protein innovation and production up to now. When China comes online which should be very soon, we will see disruption on a global scale that will be nothing short of breathtaking.

This is why we are sticking with the prediction made by Pat Brown, CEO of Impossible Foods, who states that “the [factory animal ag] industry will disappear within several decades.“

Animals Need You to Comment to the USDA-FDA About Labelling